Swedish researchers have discovered that a substance found in human breast milk has the ability to kill cancer cells, according to a study published in the PLoS One Journal.

You can read the article from Fox News here.

It is such an amazing study! I have heard, in the past years, that breast milk can help in cancer treatment......but this is just so amazing! Just the thought of something so natural to help treat people with cancer......is just remarkable!

Another super power breast milk has!!!
at 12:47 PM No comments: Links to this post

In this month's edition of Baby Talk Magazine, they did a humorous "Crib Notes" section all about Mother's Day. The page reads:

"There are Mother's Day cards for every relationship, but the very people who make the holiday possible-the babies-have no voice on the Hallmark shelf. We offer a few greeting cards written from a tot's point of view.

Shawn Bean and Sabrina James created a few cute cards, but this one really caught my eye!

How cute are these?! I have seen these adorable MoBoleez hats a few months back....and now they have made it in the news!!!!! Any LA moms out there that have one?

I would love to add this to my attire......specially with summer approaching!
at 3:00 PM 2 comments: Links to this post

What is your story?

We are growing and I thought it would be nice to get to know each other. Our Facebook Group and our Blog are gaining new members all of the time and I am sure everyone has a story! I know I do!

So I thought we could do a "story" day once a month. All you have to do is email me a story at mummiesnummies@gmail.com, regarding breastfeeding. It can be funny, emotional, inspirational, informative, or even a friend's or family's story!

One story will be "Spotlighted" on the first day of every month. Each story will be picked at random, by my daughter Joslyn, in a very high tech way....drawn out of a hat!

Please have you stories in by April 27th. Each story should be no longer than 500 words and please make sure it is well-written and grammatically correct.

Why a stop watch?

In my last post, I posted a picture of my daughter, Joslyn, nursing her baby. Many people have commented on the picture, but to my surprise many have asked why a stop watch.

I guess it is just so routine for me that I don't even question it. It never occurred to me that some people might find it odd. So I thought I would explain why I use a stop watch.

Katelyn has pretty bad Reflux and needs to be monitored how long she eats. I have found that if she nurses for more than 10 minutes per side she will spit (most of what she takes in) up. So in the beginning, I would stop her when she reached 10 minutes, whether she was done on that side or not.

Now that she is 5 months old, she has gotten more efficient at nursing. She rarely reaches the 10 minute mark, but I still time her to make sure she is eating well.

So there you have it....a secret tip of mine.

(HINT HINT....Most cell phones have a stop watch function, too!)
at 9:39 AM No comments: Links to this post

I caught Pooker feeding her baby the other day and I could not stop laughing! I was able to get a picture and I am glad I did! It is priceless!!!!

Yes, she is holding my stop watch! Due to Kit Kat's reflux, she is limited to 10 minutes per side, while she nurses. If I feed her any longer, her reflux is horrid, loud, and painful.

I guess Pooker watches me more than I realize!!!!!

How about you, do you have hysterical photos to share? 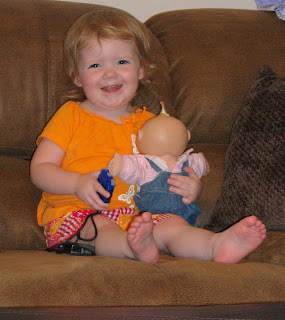 In honor of my oldest daughter turning TWO this weekend, I thought I would stray from breastfeeding and post about another topic I advocate the awareness of.
Breath Apnea and SIDS (Sudden Infant Death Syndrome.)

Some of you know that my oldest daughter, Joslyn, stopped breathing at 3 days old and was rushed to Children's Healthcare of Atlanta at Scottish Rite. While there, she had 2 more episodes. During her episodes she was awake, either nursing or taking a liquid medicine, would turn blue and she also aspirated a couple of times.
After 4 days and a battery of tests, Joslyn was diagnosed with Silent Reflux and Breath Apnea. Unlike normal Reflux, Joslyn would not spit up. She instead swallowed her reflux down which caused her to choke, stop breathing and aspirate. We called these episodes "blue episodes" as her face would turn from grey to blue while she was "refluxing."

Joslyn was placed on an Apnea Monitor, which she wore 24 hours a day 7 days a week, for 4 months. She was then on the monitor only while she slept until 7 months old. At this time she had outgrown the monitor and we had to give it back.
My husband and I grew so attached and dependent on the Apnea Monitor, that we were so scared to let her sleep, let alone be in a separate room than her. We did some research and found a great remedy to OUR sleepless nights and fears.
The Baby Sense V Monitor is unlike any other motion monitor. This monitor has 2 sensor pads, so it grows with your child. This monitor

is so sensitive that it picks up Joslyn's ceiling fan when it is on medium. A simple fix for us, we just put her fan on slow. The monitor picks up every breath, movement and heart beat. We have been using it every day since Joslyn was 8 months and to this day it still works wonderfully. We even bought a second one for Katelyn.

Watching your child turn blue and hooked up to a dozen wires and monitors is such a horrific nightmare, even that is an understatement. I have family and friends who have lost their precious babies to SIDS, there is no coming back from a loss like that. In my opinion, this monitor can save lives. It gave us peace of mind and still does.

I am so very happy to say that Joslyn has been Reflux, medicine and "blue episode" free for one whole year!

So, to all parents, soon to be parents, family and friends......please hug your babies extra hard and please think about all the babies out there. Even if this post saves one baby, that is one family that does not have to mourn.

Happy birthday to my first miracle .... she is a strong little fighter!

~Mummie
at 9:40 AM No comments: Links to this post

Breastfeeding Could Save Lives

Thanks to Jo Ann for sending me this article!

This article is FULL of great info! It is such a positive article for breastfeeding moms! love the idea of 90% of women to breastfeed their babies....but unlike Dr. Larry Gray, a University of Chicago pediatrician, I do not think that number is feasible. Sadly, I feel that some women who do not breastfeed, choose not to do it for their own reasons. Some women do have medical reasons as to why they can not breastfeed, but the women who do not even attempt to have other reasons. To some of these women, education may work. But to the majority, they already have their minds made up.
To know how many lives could be saved, is just amazing! This quote was shocking to me...

About 43 percent of U.S. mothers do at least some breast-feeding for six months, but only 12 percent follow government guidelines recommending that babies receive only breast milk for six months.

I was in that 12% with our youngest and am currently in that same percentile. I was curious to see what percent of women nurse past 6 months. This number was shocking...one study said only 7%!

So what are your feelings?
at 11:17 AM No comments: Links to this post

In honor of Easter, I decided to do some research to see if breastfeeding was mentioned in the bible. To my surprise....I found some!!!!!


Genesis 21:7
And she added, "Who would have said to Abraham that Sarah would nurse children? Yet I have borne him a son in his old age." 8 The child grew and was weaned, and on the day Isaac was weaned Abraham held a great feast.


[Song of Solomon 8:1
If only you were to me like a brother, who was nursed at my mother's breasts! Then, if I found you outside, I would kiss you, and no one would despise me.


These are only a few I came across. Pretty neat, huh?