There is always some debate on how much babies should weigh. Some doctors will say "your baby is too small" while other doctors will say "I am not worried about his/her weight." The crazy thing is this has been said about the SAME baby... just different doctors.

It has been proven that most breastfed babies tend to gain weight slower when compared to formula fed babies. Some people will look at that and say "he/she isn't gaining weight." But in all honesty.... it is exactly the opposite. Just because a 3 month old breastfed baby does not weigh the same as a 3 month formula fed baby does NOT mean the breastfed baby is not getting enough. It does not mean the Mummie should "top" him/her off with extra breastmilk or formula. What it does mean is that breastmilk is easily digested and gets absorbed into the body faster and more efficiently than formula. Is this a bad thing? No. All it means is that the "weight gain" should not be compared to a baby who is eating a different form of food. Because, no matter how you look at it, there is a difference between formula and breastmilk. So why do doctors compare breastfed and formula fed babies on the same weight chart?

Some parents do not know that there is actually a very different weight/growth chart for breastfed babies. Not all doctors use the breastfed chart, but they really should and are recommended to do just that. When Pooker was little (and I do mean little.. she was a tiny thing) she was labeled as "poor weight gain." In all honesty this was a true label. At 5 months old she was 13 pounds. She was not even double her birth weight. Now, she did have some health problems which did connect to her low weight gain.... but there was a pretty big discrepancy between what two doctors charted her at. One doctor (her Pediatrician) charted her at BELOW 0%, when her GI Specialist charted her at 5-7% for her age/weight.  Now why is that? Because her Pediatrician  was using the "formula fed growth chart" while her G.I Specialist was using The World Health Organization's breastfed growth chart. The CDC recommends ALL pediatric doctors use the WHO breastfed charts for ALL breastfed patients.  Sadly... not all do. And the difference that both charts create can be the difference between FEAR and normal weight gain.

It is best to know what chart to use for YOUR child and you may even want to ask your pediatrician which chart they use. When Kit Kat was little, I asked our breastfeeding friendly pediatrician. She looked at me like I had a million snake heads coming out of my body. I explained what the WHO charts were and she had NO clue. It is always better to ask, to be prepared and to KNOW your stuff.

Below are the WHO charts for boys and girls. Yes.... boys and girls grow at different rates. Remember.... no baby is the same as another. Use these charts as a reference not as your baby bible. Watch YOUR child, be watchful of their milestones not so much their weight or what the scale says. Because just like YOU, your child isn't a number on the scale. They are a person... just smaller. 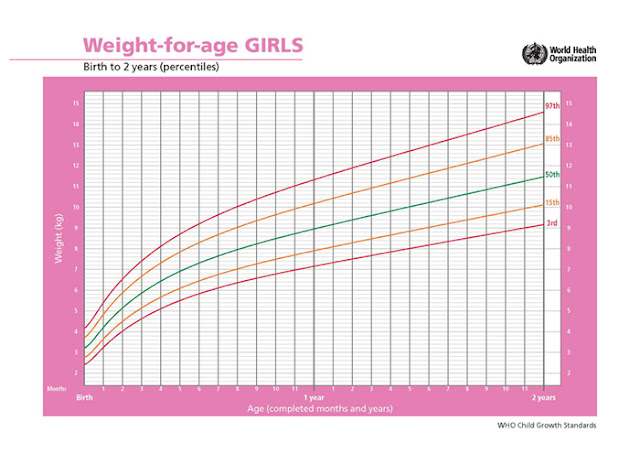 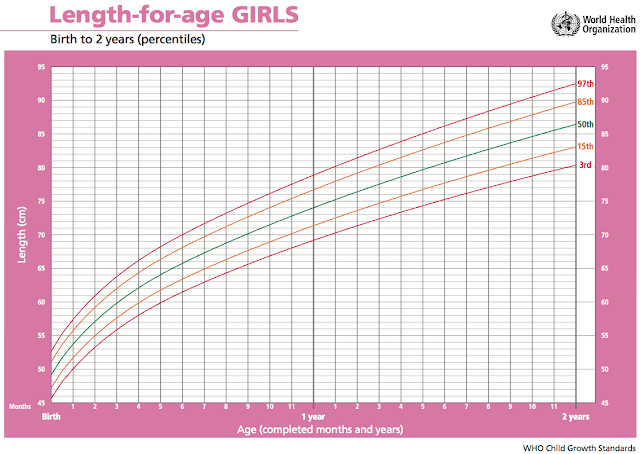 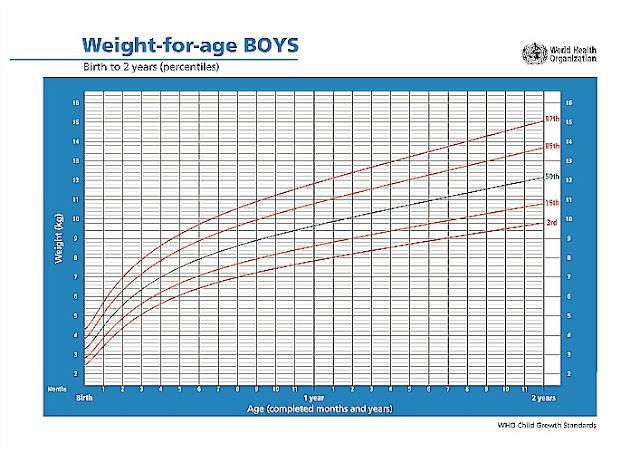 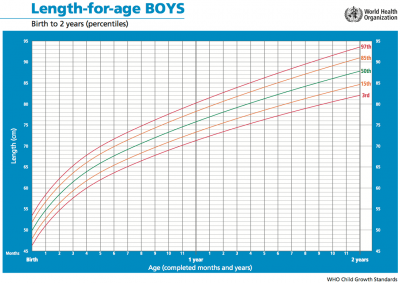